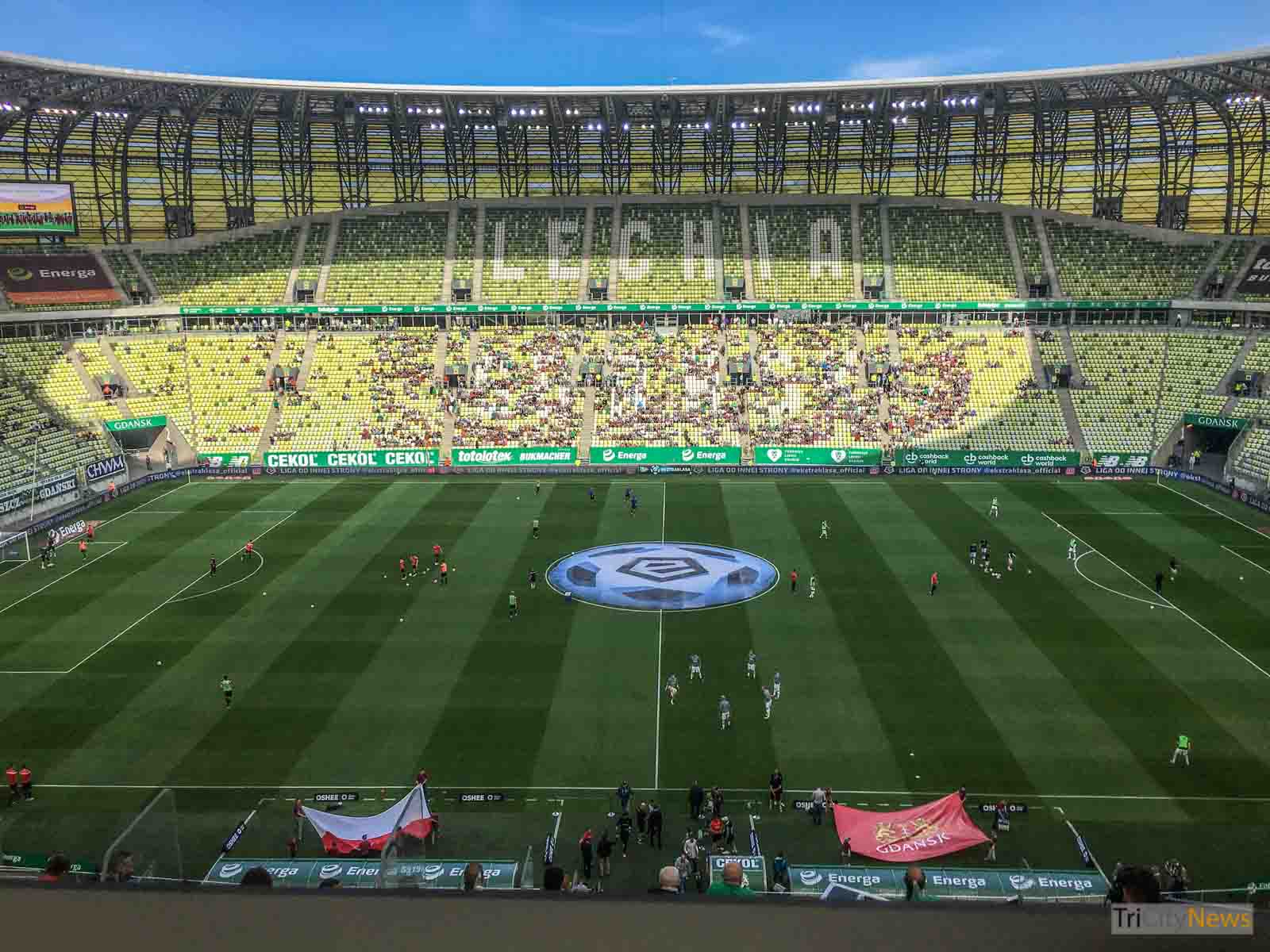 Lechia Gdansk hosted Cracovia on Saturday 22nd July at 18:00. It was the first home game of the 2017/18 Ekstraklasa season. Michal Probierz left Jagiellonia Bialystok, after 3 years in charge, at the end of last season. He is now head coach at Cracovia. The match against Lechia was his first away game with the team. Cracovia fans didn’t attend the match due to a ban.

In the game in Gdansk, the officials used Video Assistant Referee (VAR) for the first time at Ekstraklasa match. Referee Szymon Marciniak is the only referee, so far, who is qualified to use the VAR system.

The video Assistant Referee can be called upon only during situations that are crucial for the game for example; goal, penalty, direct red card.

The match kicked off to the beat of the drum and the Lechia fans in fine voice. Cracovia were the first in possession but didn’t really pose any threat to the Lechia defense. It only took 2 minutes before Lechia had a chance through a Milos Krasic corner but it was too long for anyone to get to it. Just 1 minute later Grzegorz Kuswik had a close range shot saved by Wilk the Cracovia keeper.

Lechia got a free kick on the edge of the area in the 11th minute. Krasic executed it, but Cracovia’s defense managed to block any shots on goal.

Cracovia had their first chance of the match in the 14th minute after some skillful play between Wdowiak and Mihalik but even after some confusion between the Lechia defenders, the shot was off target.

In the 20th minute Matras gave away a dangerous free kick, Mihalik took the free kick and crossed into the box where Siplak attempted a spectacular overhead bicycle kick but luckily for Lechia he didn’t connect with the ball.

After the first 20 minutes were mainly all Lechia, Cracovia really started to get into the game and press Lechia back into their own half. Cracovia started to cause the Lechia defense all sorts of problems and Piatek even hit the crossbar in the 34th minute.

Lechia began to regain some control leading up to the break with Haraslín making some decent runs up the wing and Flávio Paixao saw his long range effort just over the crossbar in the 42nd minute. The best chance of the half fell to Krasic on the stroke of half time when he found himself one on one with Wilk next to the right hand post but Wilk was strong and covered his goal well, good save.

The second half kicked off in front of 15,624 fans. It was Lechia with the first chance in the 46th when Haraslín took a beautiful shot from outside the area but it was just off target. Just minutes later after some confusion with the Lechia players Cracovia scored, it was a controversial goal and after a few minutes of celebrations from the Cracovia team, the referee decided to check VAR, the stadium went silent, the Referee then determined the goal was offside and it was disallowed to a huge cheer from the Lechia fans.

It was the first, historical use of VAR during Ekstraklasa game.

Lukas Haraslín was stretchered off in the 63rd minute and replaced by Mateusz Lewandowski.

In the 66th minute Cracovia attacked and Lechia tried to play the offside trap but even VAR couldn’t save them this time as Michal Helik scored for Cracovia, poor from the Lechia defense. 0:1.

Despite the disappointment of going a goal down Lechia went straight on the attack to get that equalizer and created a few good chances but even Marco Paixao couldn’t find the target. Cracovia defended well and tried to hit Lechia on the counter attack which tested Kuciak on a number of occasions.

In the 83rd minute Lechia’s defense were caught sleeping again and Krzysztof Piatek netted Cracovia’s 2nd but once again the referee checked VAR and a few minutes later disallowed the goal, Michal Probierz was going crazy in the technical area.

In the 88th minute Krasic has a great chance to level the game for Lechia but once again Wilk was there to block the close range effort.

Even after 6 minutes of stoppage time with many chances Lechia couldn’t find a way past the Cracovia keeper, Wilk.

Overall the match was exciting and at times end to end action. Lechia played well in spells but when Marco Paxio is having a bad day then Lechia can’t seem to score. Cracovia, with their young team and new manager, outsmarted Lechia and got the goal(s) they needed as well as defended with confidence and took all 3 points in what should have been a tough away game. The injury to Haraslín should be a big concern to Lechia. The use of VAR is controversial and changes the game of football but in my opinion it’s a good move.

Man of the match

My man of the match goes to Krzysztof Piatek (Cracovia)

Next Match of Lechia Gdansk

Coach Nowak made the following comments in his post match press conference:
‘In the first five minutes we had some good chances and I think we should use them. There was a lot of chaos, there was not a proper rhythm for us. We need to improve on it, just like the efficiency that was failing. We need to put more work into finishing our actions’
Nowak also commented on the injury to Lukas Haraslín:
‘It looked very serious, but we do not yet know the exact diagnosis. We will see how long Lukas will wait, because maybe it will be an operation’