The UFC in Gdansk – the summary of the event 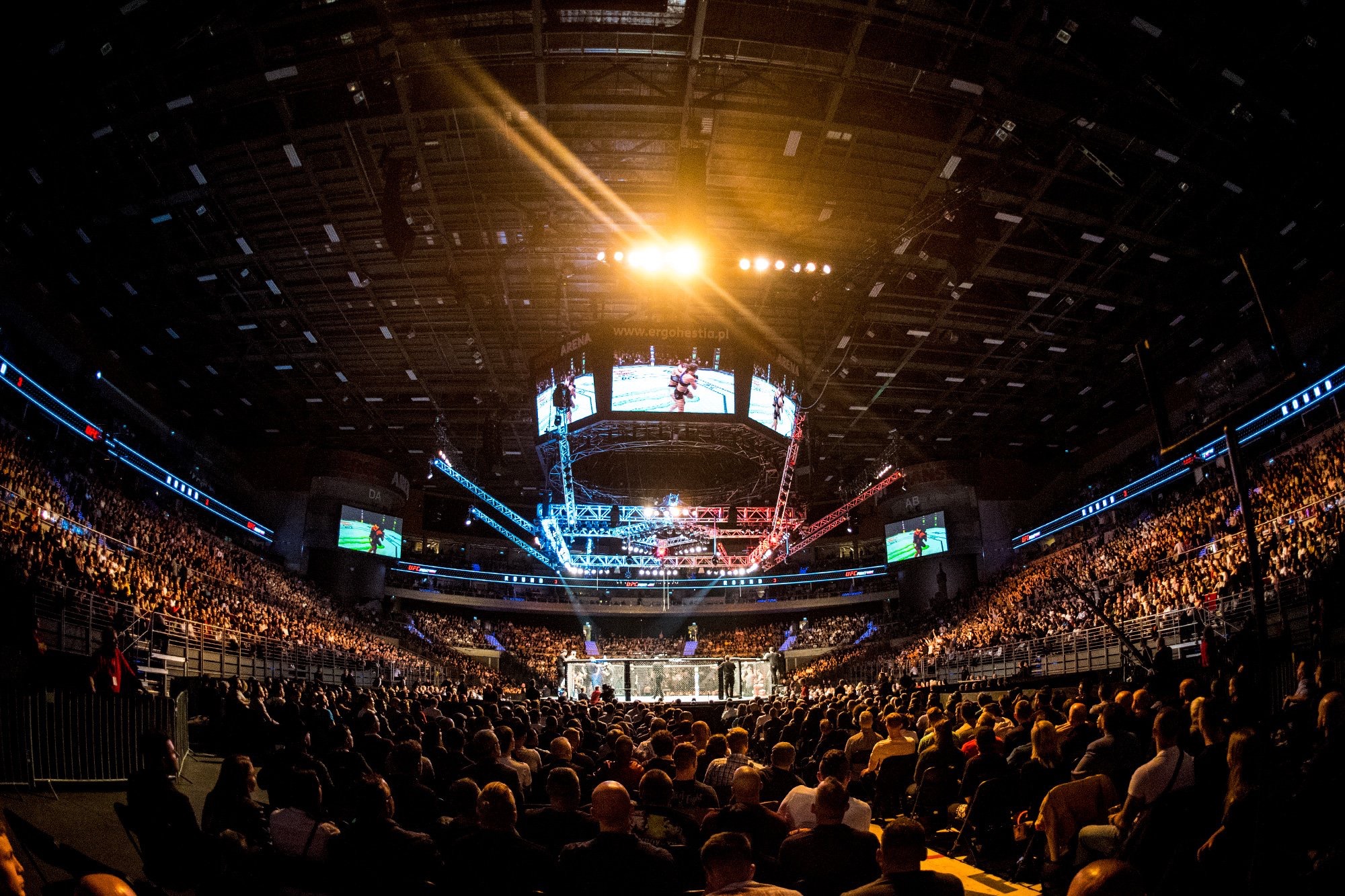 On Saturday, the 21st of October the UFC held fight night 118 at the Ergo Arena in Gdansk. The event was a sell out and fans traveled from around the world to watch some of the worlds best fighters compete in a surprisingly impressive card for a European event.

The UFC or Ultimate Fighting Championship is a mixed martial arts organisation founded in 1993 in America. It became the worlds biggest MMA organisation. MMA is the fastest growing sport in the world right now. It is especially popular in Poland with the rise of brands like KSW and FEN.

Fans bought the majority of tickets for this event well before any of the fights (The card) were announced. In time, the UFC slowly released the details as the event was getting closer.  The Co Main event surpassed my expectations with Poland’s very own Karolina Kowalkiewicz taking on UFC newcomer Jodie Esquibel. Additionally, the second pair was the UFC legend, Donald ‘Cowboy’ Cerrone against England’s undefeated welterweight, Darren Till.  The rest of the card also included some great match ups with the following fights scheduled:
Jan Blachowicz Vs Devin Clark
Oskar Piechota Vs Jonathan Wilson
Marcin Held Vs Nasrat Haqparast
Anthony Hamilton Vs Adam Wieczorek
Damian Stasiak Vs Brian Kelleher
Sam Alvey Vs Ramazan Emeev
Artem Lobov Vs Andre Fili
Salim Touahri Vs Warlley Alves
Lina Lansberg Vs Aspen Ladd
Felipe Arantes Vs Josh Emmett
Guest fighters – Mike Perry and Aljamain Sterling.

As a huge football fan you may have read my match reports on Lechia Gdansk but I’m also a big MMA fan. When the UFC announced the Gdansk event I was so excited as I could finally get the chance to attend a live event close to home. I have spent many nights staying up till 5am to watch all the pay per views. This is a sport that has captured my heart over the past few years.

I knew that UFC fans were passionate and knowledgeable of the sport. What I didn’t expect was what someone described to me as ‘UFC Family’. A group of fans and fighters brought together and united by a mutual love of the sport. I spent three days with this ‘family’. It didn’t matter what race, religion or age you were, everyone respected and supported each other.

A new level of supporting

I have never experienced anything on this level in any other sport. For example, In football you find large groups of supporters. However the respect or appreciation of fellow fans and their opinions is often lacking. Rival fans are generally kept apart in football to stop trouble. In the UFC family it didn’t matter who you supported as everyone had a mutual respect of each other’s opinions.

As fight week approached I was contacted via social media by fans from around the world asking for advice on hotels and bars because of my local knowledge and I was happy to help out. This led to a fan from Scotland, Adam Shone, contacting me about a fan meet up he wanted to organise. Adam travels to UFC events on a regular basis and has built up a network of like minded fans who all travel on their own to these events and meet up, they have all become good friends through this.

The UFC family in Gdansk

What Adam did to further strengthen the UFC family absolutely blew me away. He used his own personal time and organized a fan meet up after the weigh ins on Friday, the night before the fight night. With a little bit of advice on locations he contacted bars to set this up Then he created a group on Facebook to get the message out to all the fans traveling over to Gdansk.

Time out Restaurant in Gdansk were kind enough to host the event and did so much to accommodate everyone. They even let Adam put up UFC posters and play UFC content on all the screens.

Adam managed to convince guest fighter, Aljamain ‘Funkmaster’ Sterling, to come and join the fans. Aljamain spent time talking to fans and taking photos, he even had a few polish beers with us. Fans from all over the world turned up and had an amazing experience.

The fighters, their teams and families all stayed at the Mercure hotel in Gdansk. They were happy to meet with fans there. I spent time talking to all the fighters and despite most of them being asked for photos hundreds of times they gave each fan so much time. Once again I have never experienced this level of access and openness in any other sport. This made the weekend very special for many fans.

The weigh ins alongside a fighter Q&A session took place at the Ergo Arena on Friday 20th October. The event was free and open to all fans.
The fans were in good spirits and packed out the arena which made for a great atmosphere.

Just after the Q&A finished and as the Weigh Ins were about to start a group of around 70 Lechia Gdansk ultras stormed the arena doors and forced their way into the event, they took up a large section of one of the stands and made their presence known with some perfectly synced Lechia chants.

They were there to show their dislike for UFC heavyweight Adam Wieczorek who is big fan of rival football team Ruch Chorzow. Their presence alone led to the UFC making the decision to pull Adam from making an appearance on the weigh ins. As the event closed and people began to make their way out of the venue, around 30 riot police turned up and individually checked everyone’s ID’s. For people not used to polish football I can see that this may have been a scary situation.

The UFC spent the next few hours in urgent security meetings and made the decision to pull Adam Wieczorek Vs Anthony Hamilton fight from the card all together. They did not want to take any chances and the safety of fighters, staff and fans needed to come first. The UFC have never had to deal with a situation like this before and I believe they made a good decision.

Doors in the arena opened at 16:30 and as fans gathered outside the atmosphere was electric. Everyone was excited to see their idols live in action. The event did not disappoint at all, the fights were great and the atmosphere inside the arena was unreal. The Polish fans were incredibly loud and really got behind the local fighters.

Surprise visitor – About 10 minutes before Artem Lobov and Andre Fili fight was due to start the crowd erupted as Connor McGregor walked into the arena and took a seat ringside. He was there to support his teammate and good friend, Lobov. This certainly pleased the sell out crowd.

My favorite fighter, Karolina Kowalkiewicz, put on a dominant performance to beat Jodie Esquibel via decision. She was emotional in front of her home crowd which included her mother.

Darren Till proved how good he is with a star making performance earning him a first round TKO against Donald Cowboy Cerrone. Light heavyweight veteran Jan Blachowicz got a big win at home in Poland. He submitted Devin Clark in the second round in impressive style. Polish prospect Oskar Piechota thrilled his hometown fans in middleweight action, as he won on his UFC debut over Jonathan Wilson via unanimous decision. Marcin Held finally secured his first UFC victory in his home country, winning a three-round unanimous decision over newcomer Nasrat Haqparast.
Bantamweight Brian Kelleher beat Poland’s Damian Stasiak, breaking open a close fight to win by a third-round stoppage.

The bar in the Mercure hotel turned into an impromptu after party as all the fighters arrived back from the arena. Once again the atmosphere was amazing. Fighters, media and celebrities mixed with fans to end a very memorable weekend.

With over 10,000 fans visiting Gdansk for the UFC, local businesses experienced a large increase in trade. This is a great result for the area. As the main summer tourist season has ended in the Tricity, the UFC gave a welcome boost to the local economy.

The UFC and most of the fighters who attended will have gained some lifelong fans from this event, overall it was a huge success.
I personally, met some great people through this event who will remain friends and I know many other people will have experienced the same.