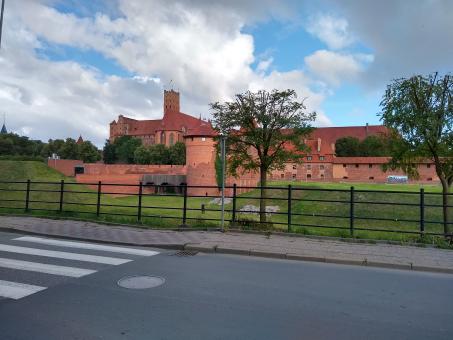 Krzyżakon is a fantasy convent organized by youth from Malbork. What is special about this assemblage is the fact, that it takes place in one of the biggest castles in Poland. Malbork is well-known from its medieval climate and during Krzyżakon it becomes a trump card building the atmosphere. Very friendly people and a specific atmosphere became a definition of Krzyżakon. That was the 3rd edition. People often compare this event with Pyrkon, a huge fantasy convention similar to ComicCon. Krzyżakon became a smaller version of them during the last 3 editions – a great place to start our adventure with fantasy convents. It lasts for 2 days, since Saturday morning, till Sunday at 2 pm, so in the price of a ticket, we have also the price of a place to sleep. School, which is about 5 minutes from the castle organizes Sleeprooms and accreditation point.

Okay, but what actually is a fantasy convention?

Fantasy convention is a place of meetings for geeks, bookworms, cosplayers, RPG fans, gamers and all people wanting to spread their passion. During Krzyżakon we met students from Hogwart, kids from Gravity Falls, a nice lady from Scary Movie, Witcher, Stalkers, knights and a gentleman in fancy, steampunk jacket. These are just examples of how different characters and personalities we could see in the castle thanks to the cosplayers. Krzyżakon surprised us with its diversity. It was a great opportunity to meet people wanting to spread their hobbies and try something new.

The main attraction of this convention was for sure people. The event gives an opportunity to listen to interesting lectures from amazing guests: writers, make-up artists, game masters and the permanent residence of the castle (professional princesses and knights!). Krzyżakon offered 4 auditoriums for lecturers in the Karwaria and special space inside medieval construction for attractions organized by the castle residents. LARP and RPG sessions took place in the underground of castle and school, where guests could also play board games and tried themselves in a Convent Game. Convent Game was based on filling up quests. They had to choose a team – Poles or Teutonic Knights (a reference to Grunwald Fight, 1410) and fulfill challenges including building a shield, dueling with swords, taking photos of special places in castle and much more. For every solved quest, participants were given a beautiful coin with the logo of Krzyżakon and griffin at the backside.

Tricity News, among others, participated in a lecture of a young make-up artist – Małgorzata “Chora” Mięsiak – who prepared workshops about characterization. That was a great preview of how to become a film or book character. We also visited the lecture given by Michał Gołkowski – a fantasy, history and science fiction writer. After meeting with readers he started a lecture about the scariest and most unbelievable stories from Great War. He explained also the phenomenon of writers inspiring their books on facts and modify history. An interview with him about literature, RPG and Krzyżakon is available below.

A lecture about computer addictions given by a writer – Krzysztof “Kero” Persa – was similarly interesting. He was talking about positive influence made by computer games like learning English, history, and tactic skills development, but also negatives such as what is the most dangerous about computer addiction. The difference between passion and addiction. The lecture was so interesting also due to the fact that Krzysztof Persa is a therapist and a gamer. Additionally, he told how is it to be a writer and earn money from it – believe us, it’s not that easy as you can think. So a bit about the economy and business we heard too.

And that was only the first day!

We also had an opportunity to learn how acting is useful in RPG games, how to create a good board game, about the castle – what is special in Malbork, about its architecture. Among lecturers appeared also Rafał Rychlewski, Jacek Kloss, Agata “Anireh” Włodarczyk, Łukasz “Tymon” Tymiński, Sławomir Wosek and Bartosz “fMooNek” Sikora. At the same time in the castle we could meet interesting people who told us a bit about that medieval climate in the castle including cooking workshops (Bogdan Gałązka), calligraphy (Bogdan Gałązka), dragons in Malbork, fencing workshops (Fechtschule), amber (Robert Bartkowski) and see birds of prey in action during falconry show by Grupa Szponem i Mieczem. At 7 pm, on Saturday, in the castle church, we could hear a harpist concert – Barbara Karlik.