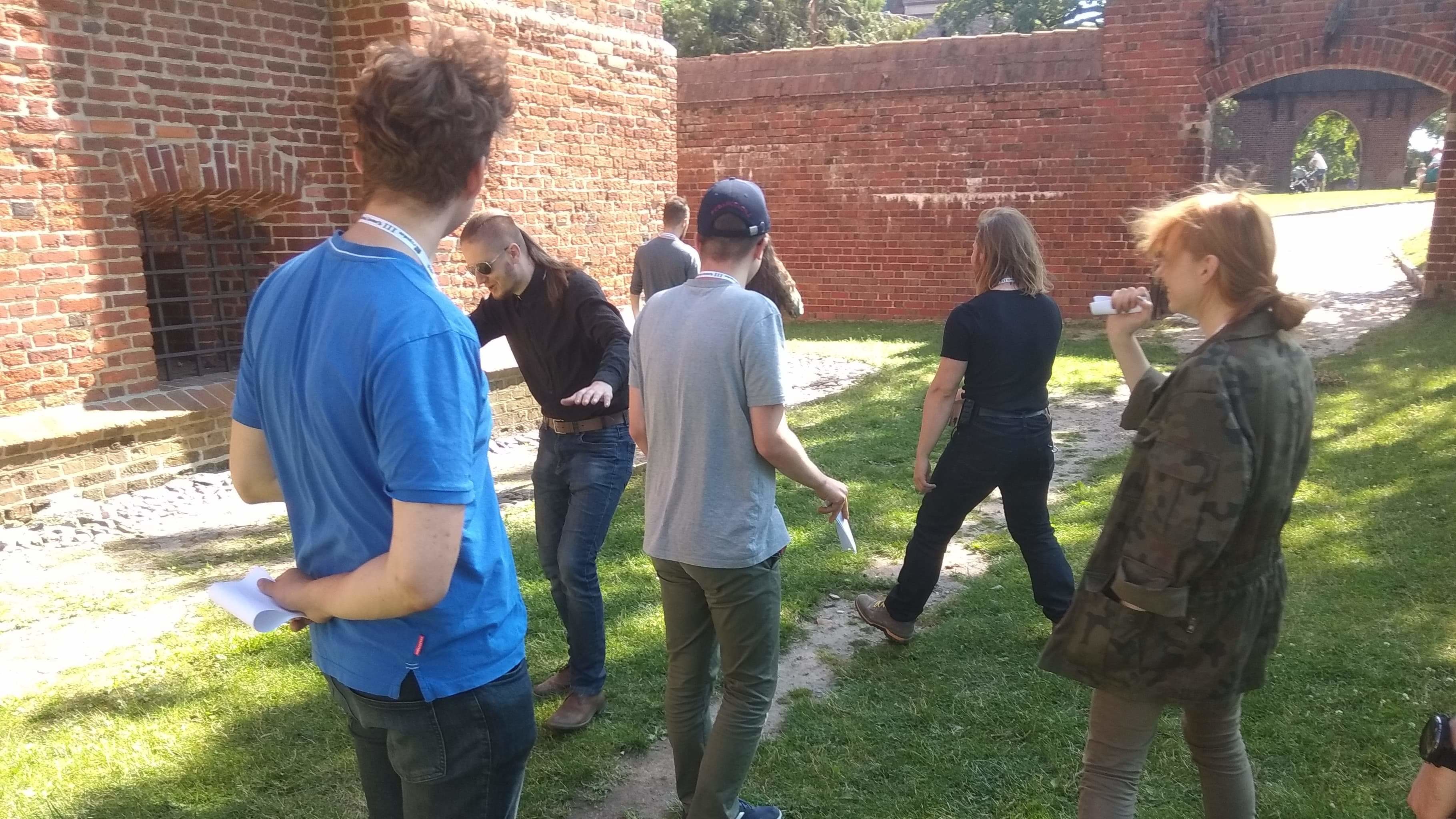 Krzyżakon among lectures was focused on games. Every player could find a thing for him there. We could play board games in Gamesroom, try ourselves in LARPs and RPG sessions and talk about video games during discussion panels. Some cosplayers decided also to break the tradition and dress up as characters from computer games, not films or books. We had an opportunity to meet a large group of fans of post-apocalyptic games during LARP taking place in Fallout universe. In games room took place special tournaments. But what are LARPs, RPG games?

Except for lectures and shows, guests of fantasy convent could also participate in RPG sessions, LARPs and play board games in a special zone. Inside games room, which was open 24h, Krzyżakon organized tournaments in certain board games (for example Munchkin). Since 11:00 in a special part of dungeon we could try RPG games led by best local game masters. For everyone, who don’t know, what is RPG – Roleplay Game is a game, where everyone has his own character placed in certain area and universe. We can become an elf, a soldier of Galactic Republic, explorer, politician or anyone else. We have to fulfill special quests and become a hero of our very own story. Game master tells us about the world during the game. This includes the consequences of our decisions. Sometimes, when we decide to do something (use magic, attack someone, or explore the area) we have to throw dice and with a dash of luck achieve awards. The game takes place on a table (similar to one of the first scenes of “Stranger Things” for example). A normal session takes about 4h, but during Krzyżakon players could participate in sessions that were shorter or longer, sometimes with age restrictions. For the youngest contestants of Krzyżakon Miron Wójcikiewicz prepared special RPG session on Sunday morning. What is best about this kind of games they usually are for everyone – that one who have 10 years and 100 years – everything depends on the creativity of Game Master.

An alternative for RPG sessions were LARPs. What is it and what is the difference? The phenomenon of a LARP explained to us a great LARP Game Master – Tomasz “HunterCT” Sikora. With his brother, Bartosz “fMooNek” Sikora he prepared LARP for beginners on Saturday called “Czas Próby – Chwała Śmiałkom”. That one was placed in medieval fantasy climate. Tomasz Sikora organized also 2 more LARPs – one placed in a climate similar to Star Wars and one in Fallout (post-apocalyptic game). The post-apocalyptic climate was also visible on a smaller LARP led by Małgorzata “Chora” Mięsiak. Below a short interview with Hunter, our Game Master.

Tomasz “HunterCT” Sikora – What is LARP? (Translated with a help of Mikołaj Debicki)

Reporter: Hi, I’m a reporter of TricityNews, nice to meet you.

Hunter: You’re welcome, nice to meet you too.

Reporter: What is LARP?

Hunter: So, basically LARP is great fun, it’s a role-play real-life game, like in real-time. Each player becomes their own character or one described by the Game Master and most usually each of the characters has it’s own missions, their own goals and things they want to achieve… they have their own character trades, which are all described by the Game Master before the game. Each player gets to know them at the very start of the game and he gets to know the character themselves. Usually, players are trying to achieve the goals described them. Basically, this state playing as an interaction between players, so the way they achieve their goals is because of the communication that they try to achieve with other players. The ways of doing that are based on doing tricks, on make other players believe in you or try to make them believe your words. So you try to communicate with people and make them understand you and support you or make a trade for them. There are no computers used or any other electronic devices. Each player is playing as own human being. So basically a LARP game is a mixed combination of a theatre play as well as a storytelling play.

Reporter: Okay, and what is the difference between RPG and a LARP game?

Hunter: It’s easier to say what is same, cause these are two different things somehow… similar, but very different. So, RPG sessions, role-playing sessions mostly based around actual playing with players around the table. There is the use of player character cards which contains a lot of information about the character and statistics – strength, charisma, intelligence, or whatever. The Game or Dungeon Master (as it is sometimes called within D&D[1]) briefly describes the situation coming around and players themselves are trying to somehow respond to the game’s Dungeon Master’s description and trying to tell him, or her, how they react to the presented situation. Most usually the fighting sections are supposed to be in a, like, tour system, where the whole fight is divided into turns one-by-one in each turn. So on total opposite of that in live-playing sessions (LARPs) all the players stand up from the table and play with their whole body, try to actually imitate all the move, all the actions. The mechanics are not that important and their rules are pretty reduced in LARP games, where the actual role-playing and the fact that we try to imitate the characters play a much more important role in a game. Due to the fact, that game takes place in one room, but not on a one table, the role of Game Master is really reduced in that way, that what are they doing is basically what characters are doing more, rather than describing them what’s happening around them, cause these are the players deciding what to do. LARP game mostly concerns the players and how they behave among each other right now in the game, all on the canvas, which was written by the Game Master before a hand.

Reporter: Okay, then thank you

Hunter: Thank you too

After the LARP game, TricityNews visited also Michał Gołkowski, who was mentioned in the first part of the article. A writer introduced us to his own book experience and commented on what is special about Krzyżakon.

[1] D&D – “Dungeons and Dragons” – one of the first fantasy tabletop games by Gary Gygax and Dave Arneson first published by Tactical Studies Rules in 1974, placed in a fantasy universe, seen as the begin of role-playing games