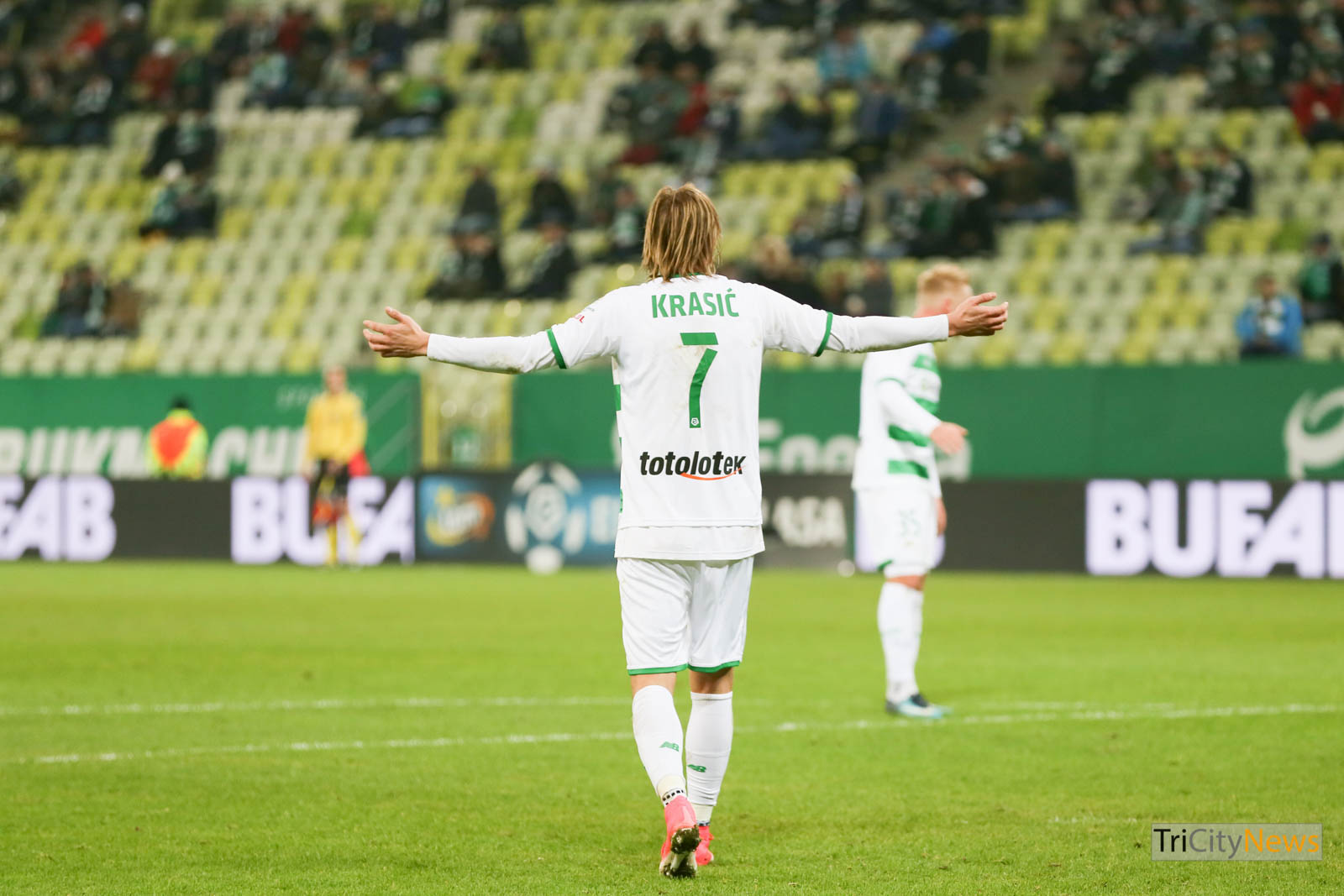 Last weekend the teams from Tricity played their away matches in the 28th round of Lotto Ekstraklasa. On Friday, Lechia Gdansk lost in Poznan by 3:0 and is now 13th in the championship. One day later, Arka Gdynia suffered two goals from Jagiellonia Bialystok in added time and lost 3:2. By this loss against the first in Ekstrakalsa, Arka didn’t manage to enter the top half of the table yet.

Lechia Gdansk is getting into a worse and worse situation with each game. With the match in Poznan, they reached a streak of ten games without winning. This match left Gdansk team on the 13th place and only two points from the relegation zone.

Lechia began the match in Poznan with two chances within the first ten minutes. In the fourth minute, Kuswik got a little late to the ball after a bad action from the home defense. As a result he lost the duel with keeper Buric. Right after that, Slavchev passed Lech’s defenders easily. His shot was however a little too wide so Lechia lost the opportunity to score.

In the 17th minute, Lechia’s defence was slow to put the ball away. Lukas Tralka benefited from that entering the box. He shot giving little chance to Kuciak and put his team in front.

Already forced to replace two players including goalkeeper Buric, Lech Poznan managed to extend the lead. In the second minute of the added time Gajos served an extraordinary pass to Gytkjaer. Faster than Nalepa, the Danish forward isolated himself and shot the goal out of the reach of Kuciak.

Lech Poznan had no difficulties scoring the third goal in the 55th minute. Once again they took advantage of the slow defence action of Lechia. Jevtic shot on goal with basically no opposition after an excellent work from Majewski on the left side.

In the 70th minute, Lech had a good chance for the fourth goal with a long distance shot by Majewski. Kuciak managed to deflect this one however before Lechia Gdansk failed the goal in two good opportunities.

First, in the 75th minute, Chrzanowski saw his shot deflected by Gumny. Ten minutes later, Peszko got free after an excellent pass from replacement Krasic. The middle fielder failed the shot and the opportunity to get the 3:1.

After coming back to Gdansk, Lechia played a home sparring against Kotwica Kolobrzeg. The guests currently play in the third Polish league. The team from Gdansk lost this match 0:1. The White&Greens played with some of their main team players like F. Paixao, Krasic, Mila, Wawrzyniak or Augustyn. Is there any chance for Lechia to come back on tracks?

Arka Gdynia lost on Saturday away to the first in Ekstraklasa by 3-2. The team from Gdynia was on the winning side until the added time. Jagiellonia Bialystok was able to change the odds of the game in the last two minutes of the match.

Playing at home, Jagiellonia was the first team to create some danger as Bezjak almost scored in the 9th minute. However, keeper Steinbors managed to avoid Jagiellonia’s goal with a good save.

Eleven minutes later, Arka Gdynia got the advantage after Jagiellonia’s defender Guilherme tripped Zarandia in the box. Szwoch converted the penalty and set his team in a good position to reach the eight firsts in the classification.

Jagiellonia could have got the 1:1 in the 25th minute but Bezjak’s header after a free kick hit the post. Three minutes later, it was Arka that was very close from the 0:2. Shot by Soldecki was deflected by a Jagiellonia’s defender when keeper Keleman was already on the ground.

Just after the 30th minute, Bezjak was near the goal again. This time he tried with an acrobatic shot but once again Steinbors was on the right spot to avoid the equalizer. Six minutes before the break, Jagiellonia’s forward finally got his deserved goal after a cross by Guilherme.

Although Jagiellonia came stronger in the second half, they failed two good chances of getting the lead both by Frankowski. It was Arka Gdynia that reached the advantage again. Romanczuk mistakenly passed the ball to Szwoch who beat Keleman from a long range in the 64th minute.

When everyone thought that Arka Gdynia would reach its second win in a row, Jagiellonia scored two goals in the added time. As a result they got a win which allowed Bialystok team to secure the leadership in Ekstraklasa.

Already in the added time, Romanczuk was close to the goal after a good header. Steinbors saved it to a corner kick. In the last minute of added time with keeper Keleman in Arka’s box, Jagiellonia reached the equalizer. Burliga, who benefited from being unmarked beat Steinbors easily.

Already after the four minutes of the added time conceded by the referee, Jagiellonia got an unexpected 3:2. After a cross from Sheridan Wojcicki scored a goal that was enthusiastically welcomed by Jagiellonia’s fans.

With this result, Arka Gdynia fell onto the tenth place in Ekstraklasa with 37 points. This is two points less than Zaglebie Lubin that didn’t got better than a null at Gliwice on Friday. Arka still has some chances of jumping into the safe, top half of the table.

After the pause for Polish national team’s games preparing for the World Cup, Lechia Gdansk will play once again away at Kielce on March 31st. With each match, they need points more and more desperately. Arka will play at home trying to get points from Legia Warsaw who are second in the table.