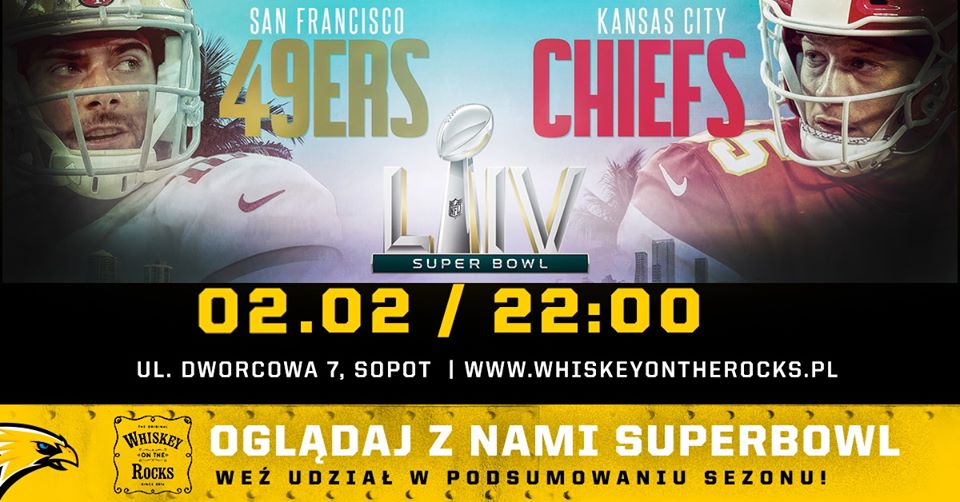 Whiskey on the Rocks as well as Seahawks Gdynia invite for the most important event of the NFL season – Super Bowl LIV.

The 54th Super Bowl will take place in Miami Gardens, Florida. San Francisco 49ers will face Kansas City Chiefs to fight for the championship of the 100th NFL season. The first ones have already participated in the event six times. Only once though they managed to win. Kansas City, on the other hand, have been a part of the final only twice so far. The success ratio is quite impressive though, as they also are in possession of one championship title.

It isn’t easy to follow the NFL from Poland. The official channels are relatively expensive and some of the options do not work due to area limitations. This, however, doesn’t mean you can’t enjoy the emotions typical for Super Bowl parties. Two American Football clubs from Tricity organize parties on that special day to celebrate what’s the best in Football.

Multiple champions of Poland, Seahawks Gdynia will meet in Sopot, in Whiskey on the Rocks. Apart from the fantastic atmosphere and emotions around the main game, the event will also summarise the 2019 season. In addition, the restaurant prepares a special, American menu for the party.

Seahawks Gdynia’s Party starts at 10:00 pm. At 11:00 pm there will be an official summary of the 2019 season and the main game of the night starts half past midnight.