Arka got back to winning ways by defeating Jagiellonia Bialystok 4:1 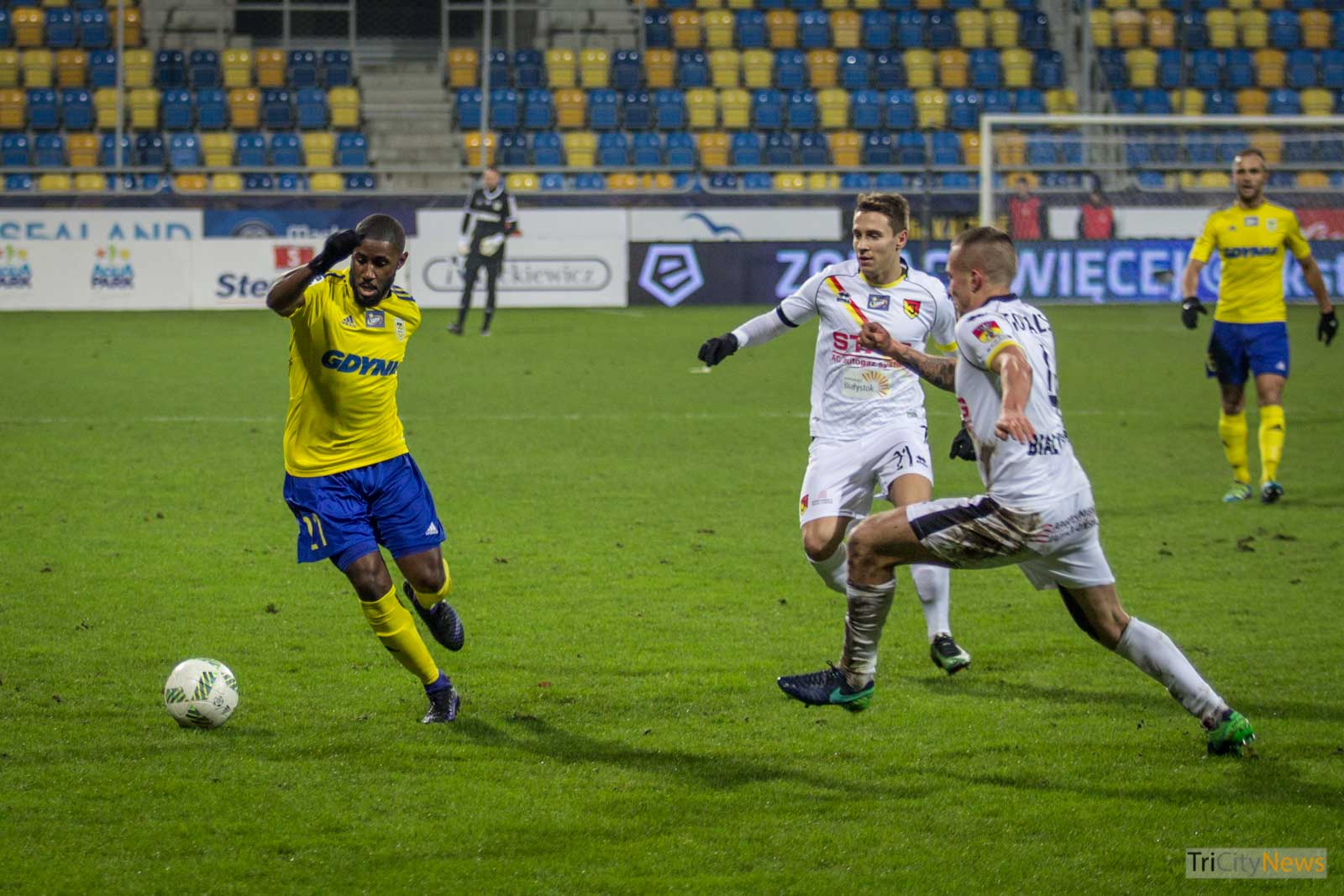 Last Sunday Arka Gdynia played against Jagiellonia Bialystok in the 12th round of Lotto Ekstraklasa. Over 11.000 fans gathered at the stadium in Gdynia.

In the last two games in Gdynia, Arka Gdynia had to share points with Zaglebie Lubin and Cracovia Krakow after two 1:1 draws. This time though it was much different. The fans who came to see the Yellow&Blues couldn’t be disappointed. Their team seemed to finally find the missing piece they were looking for recently. As a result, after 90 minutes of great football they kept 3 points in Gdynia.

The game started with the attacks of the visitors who quickly pushed Arka into the defense. The Yellow&Blues however, were well organized in the penalty area and effectively stopped Jagiellonia’s attacks. On the other end of the pitch Piesio tried to threaten Kelemen’s goal but his shot was inaccurate. After 10 minutes of Jagiellonia’s attacks Arka took the initiative.

In the 12th minute Michal Marcjanik’s header missed the post by inches. Just one minute later, after another Marcjanik’s header, the ball found its way into the Kelemen’s goal. First Siemaszko received the ball and with an impressive bicycle kick tried to defeat Kelemen, but the ball ‘only’ hit the bar and it came back into the penalty area right on Marcjanik’s head who gave Arka the 1:0 lead.

Jagiellonia had their chance after a free kick, but Wlazlo’s shot missed Steibors’s goal. In the 21st minute Damian Zbozien’s perfect cross found Siemaszko (who played his 100th game for Arka) in visitors’ penalty area. The irreplaceable ‘Siema’ scored his 3rd goal for Arka Gdynia this season. What an amazing way to celebrate the 100th appearance in the Yellow&Blues team!

After the 2nd goal Arka stopped pressing aggressively and Jagiellonia began to gain more and more advantage. This resulted in a 34th minute free kick after which Taras Romanczuk defeated Steinbors. Arka didn’t give up and they created some more chances to score, but their attempts were inaccurate. Grzegorz Piesio scored a nice goal from a distance, however in the referee’s opinion Soldecki disturbed Kelemen and the result remained unchanged . First half result 2:1.

The second half had a very similar scenario. It began with Jagiellonia’s attacks. Yet once again the Yellow&Blues managed to deal with visitors’ pressure and after 15 minutes they began to play in a more offensive way but still being careful in the defense. In the 60th minute Piesio was in Jaga’s penalty area but he shot over the bar. Five minutes later Piesio passed the ball to Siemaszko who was fouled thanks to which the referee awarded a free kick. Marcin Warcholak made a good use of his left foot and with a strong, precise shot defeated Kelemen.

Arka was leading 3:1 but Jagiellonia was not planning to give up. A few minutes later both  a huge dose of luck and Pavels Steinbors’ skills saved Arka from losing another goal. First Steinbors bounced the ball instinctively, then Michal Nalepa used his head to bounce the ball from the goal line. Cernych got the ball, but his shot, luckily for Arka, hit the post and one moment later Steinbors saved the day one more time.

In the 78th minute the Yellow&Blues increased their leading. After a throw-in from Warcholak, Piotr Wlazlo defeated his own goalkeeper with an unfortunate intervention and Arka was leading 4:1. Until the end of the match Jagiellonia kept on trying to cause any danger in Arka’s penalty area, but the Yellow&Blues were defending effectively and did not let Jaga’s players score another goal. And this result has not changed.

For Arka it was the 6th match in a row without a defeat. The Yellow&Blues with 19 points are now on the 9th place in the Ekstraklasa table with only 4 points away from the leaders – Lech Poznan, Gornik Zabrze and Zaglebie Lubin.

On Sunday, the 29th of October Arka Gdynia is going to Warsaw to play against Legia Warszawa in the 13th round of Ekstraklasa season. Another home game for Arka will be a very special derby match against Lechia Gdansk. Tickets are still available, but only for those who have been to any Arka’s match in 2017.