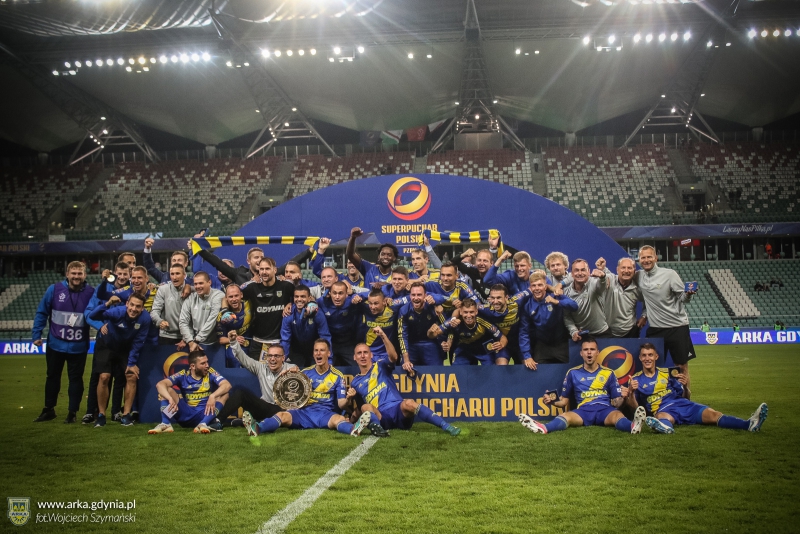 Arka Gdynia didn’t manage to repeat the success from 2017/2018 season losing the Polish Cup to Legia Warsaw. As a runner-up, they got a chance to fight for Polish Super Cup which they didn’t miss. The team from Tricity won their second trophy in a row winning 2:3 over Legia. It is the first trophy of Arka Gdynia under the command of the new coach – Zbigniew Smolka.

Arka Gdynia added another important title to their history by winning Polish Cup with a 2:3 victory over Legia Warszawa. The result allowed the team from Gdynia to win the Super Cup for the second year in a row. They are the third team in history which managed to hold the title.

Legia Warszawa got an early advantage after a quick move by Marko Vesovic on the right side. The Montenegrin midfielder easily advanced towards Arka’s box and crossed for Andriy Bohdanov to deflect the ball to his own goal in the second minute of the game.

Arka Gdynia answered well in the 19th minute. Marciniak crossed to Legia’s box to find Luka Zarandia unmarked. The Georgian midfielder made the 1:1 with a fantastic arch-shot and Arka Gdynia was back in the game.

In the 30th minute, the spectators saw yet another great goal in this game. After a corner kick, Maczynski served Luxembourg defender Chris Philips who scored from the distance. A beautiful shot gave Pavel Steinbors no chance of defending. Warsaw’s team was in front again.

Eight minutes later, Arka reestablished the draw after an excellent free-kick by Andriy Bohdanov. The ball hit by Ukranian midfielder touched the woodwork past Malarz before entering the goal for the 2:2.

Legia Warsaw had an excellent chance to get the advantage for the third time in the 39th minute with a fantastic shot by Kante. Pavel Stainbors saved it in great style though.

At the dying seconds of the added time, Arka Gdynia got the advantage for the first time in the game. Zarandia passed the ball to Zbozien who discovered unmarked Janota. The midfielder shot the ball to the far post out of Malarz’s reach.

In the second half, Legia enjoyed several chances to get a better result. In the 57th minute, substitute Carlos Lopez, allowed Steinbors to shine with a great save after a corner kick.

The Arka’s Latvian goalkeeper was in the right place again in the 76th minute when he was able to deflect the ball after a header of Hämäläinen. The Finnish midfielder was one of the choices of coach Dean Klafuric for Legia’s second half in this Polish Super Cup.

Four minutes later, Hämäläinen and Carlos Lopez teamed up for another good chance. Steinbors, however, was able to grab the ball after a cross by the Spanish player securing Arka’s advantage.

With this result, Zbigniew Smolka, the new coach of Arka Gdynia, managed to get his first success in this team. After the match, Gdynia’s coach said that the team proved they have both individual skills and team spirit. Will this help Yellow&Blues to fight for the highest goals this season?