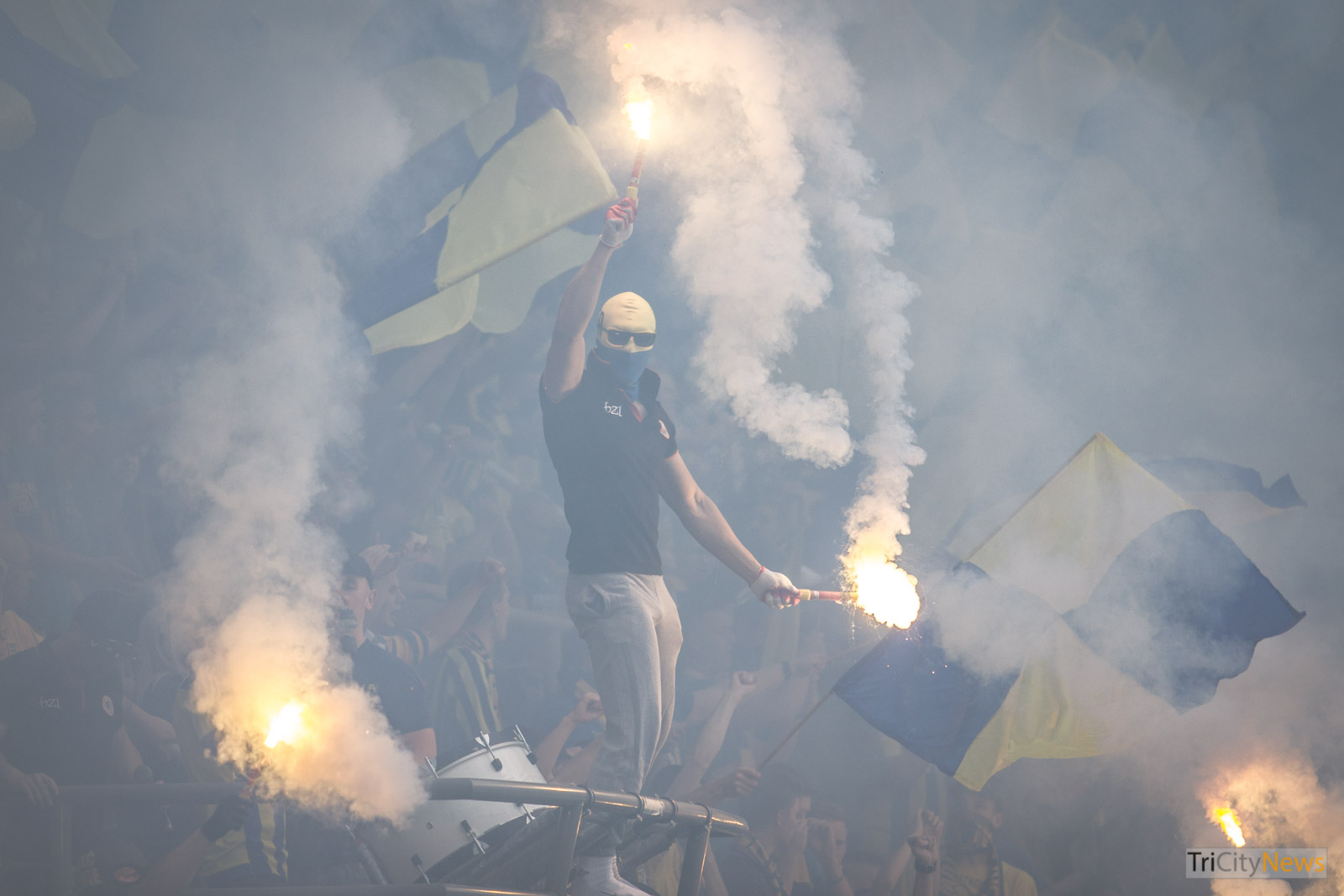 On Tuesday afternoon Arka Gdynia played in the final of the Polish Cup against Legia Warsaw. The match was an emotional roller-coaster for both the team and the fans from Gdynia. In the end, Arka lost 1:2 and finished the cup on the second place.

From the early morning the atmosphere of the football holiday was in the air in Warsaw. Thousands of fans of Arka Gdynia were traveling to the capital to support their team. After reaching Warsaw they organized a big picnic in front of the stadium. Legia fans on the other hand gathered to march to the stadium together. A long white crowd passed through the streets of Warsaw chanting and preparing for the game.

Legia dominated from the start

When both teams arrived at the field, many expected Legia to win the cup. The only hope for Arka Gdynia to win the Polish Cup was to surprise the opponent. This however did not happen. Arka entered the match focused on protecting their own goal. This in turn allowed Legia to force their style of playing from the first minutes of the match. Already in the 12th minute a good centre into the goal box landed on the head of Jaroslaw Niezgoda. The striker didn’t have any problems to direct the ball into the net and it was 0:1 for Legia.

The domination of Legia continued and it was only thanks to Pavels Steinbors that Arka didn’t take more goals. Despite occasional efforts, the team from Gdynia wasn’t able to create any danger on the Legia’s side. Legia on the other hand continued to press and this resulted in the second goal of the match. In the 29th minute Vesovic passed the low ball into the penalty box. Fred Helstrup was in a good position to cut the pass, but he didn’t do it well. He miskicked the ball and it went straight under the legs of upcoming Cafu. The Portuguese directed the ball into the net easily and it was 0:2 on the score board. One thing was sure – Arka had to make some changes if they wanted to dream about the Polish Cup.

Second half opens for Arka

During the break, coach Ojrzynski made two changes in the team. First, Rafal Siemaszko replaced Maciej Jankowski. What’s more, Grzegorz Piesio substituted Andrii Bogdanov. Fans from Gdynia know what the two players can do and this change definitely brought some hope into their hearts.

The change on the field was visible from the first minutes of the second half. This was Arka Gdynia with the fighting spirit we know. The fans of Legia Warsaw didn’t like this change, so they created a smokescreen at the stadium. The smoke was so thick that the field became totally invisible and the referee had to stop the game. Legia fans clearly weren’t thinking also about the kids and families who came to enjoy the football feast. It took long 7 minutes for the air to clear and the players could resume the match. The scandalous incident definitely added to nervousness on the field as well.

Shortly after the resume Piesio let his emotions carry him away. In the 68th minute he made a strong sliding tackle on Sebastian Szymanski. This strong and brutal tackle could have ended with a major injury. After consulting with VAR the referee could make only one decision – red card for Piesio.

The match seemed to end for Arka Gdynia. Playing in 10 against the strongest team in Poland was very difficult. This resulted in a disapproval on the other side of the stadium. After seeing the situation and hearing insults from Legia fans, the yellow and blue crowd started to disturb the match. The hooligans started to fire fireworks toward the sectors of Legia. None of the shot reached its target, but one of the flairs landed on the field. This resulted in yet another break in the match. What is more, one of the fireworks hit the spire of the stadium. This caused a minor fire for a couple of minutes.

Due to the scandalous behavior of both groups of fans, the referee had to add 10 minutes to the match. During this time Legia visibly relaxed. This was a chance for Arka Gdynia. In the 98th minute a long throw in landed in the penalty box where Soldecki directed the ball into the net. The team from Tricity rushed to the middle of the field to make their last try, but it was already too late. The referee ended the match and the Polish Cup stays in Warsaw.

The final of the Polish Cup was definitely full of emotions. It all began with a very defensive attitude of Arka Gdynia. The team had nothing to loose and we know they are able to surprise the opponents. The initial tactic mistake was especially clear when Ojrzynski made changes. If Arka had opened the match in the way they opened the second half, they could have brought the cup back to Gdynia.

The second half was a festival of scandalous behaviors. Beginning with Legia fans helping their team with a smokescreen. It is interesting that the smoke covered the field when Legia started to loose the control over the game.

Situation with Grzegorz Piesio is another huge controversy of the match. Not only was his tackle dangerous, but it was also unnecessary. It is yet another proof that big matches require very strong characters.

Finally, the behavior of Arka Gdynia fans towards the end of the match was outrageous. Though provoked with insults, nothing justifies putting a stadium full of people in danger. Polish Soccer Federation has decided to inform law enforcement authorities about the situation. This may bring a huge penalty for the club from Tricity.