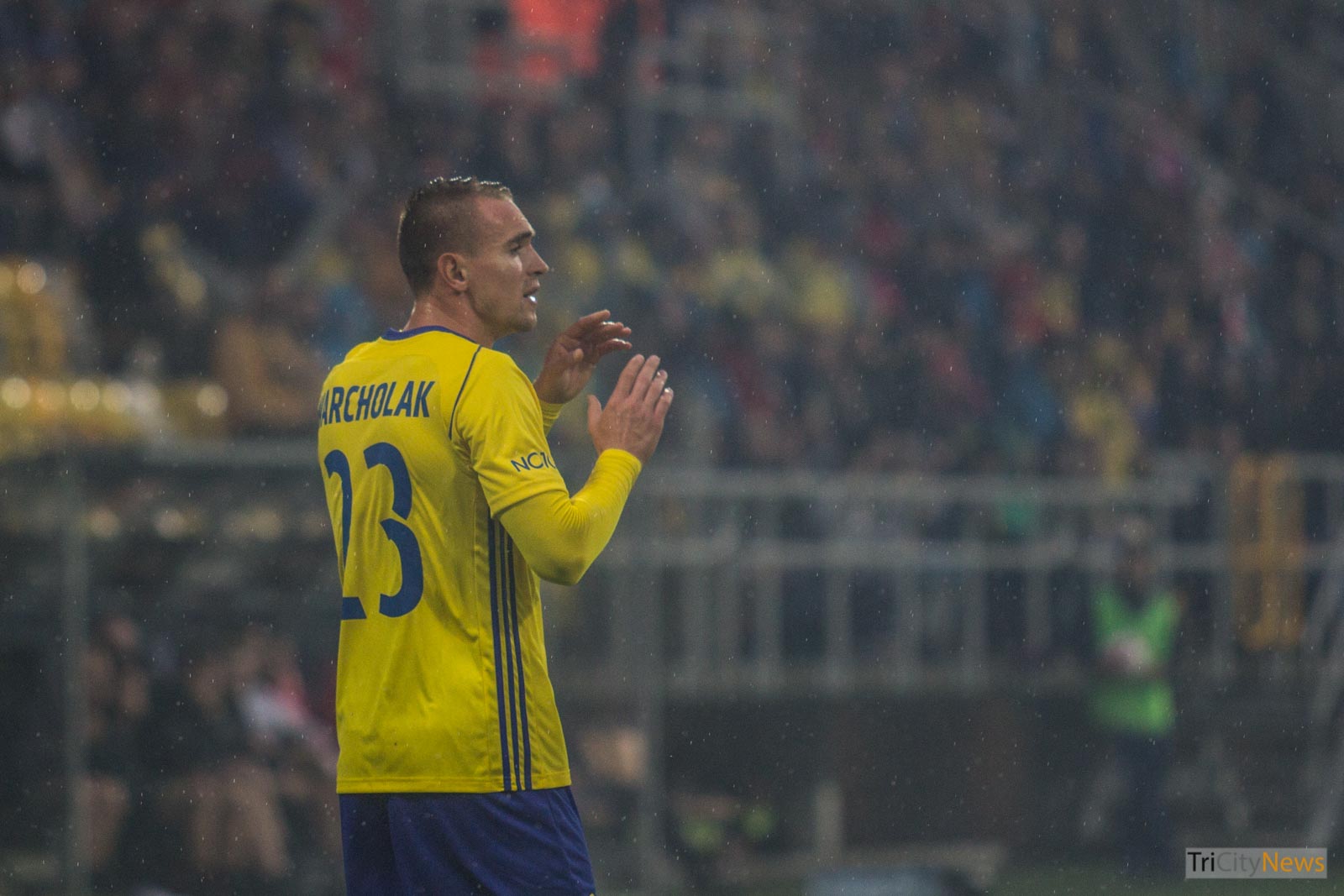 Arka Gdynia allowed Pogon Szczecin to have its second win in a row by losing to last in Ekstraklasa by 1-0. Pogon got its third win this year with teams from Tricity after beating Lechia Gdansk last week. In another game from round 21 of Ekstraklasa, Lechia allowed a draw to Sandecja Nowy Sacz in added time.

Arka Gdynia wasn’t able to get its third win in a row and lost away to Pogon Szczecin, the last of Ekstraklasa. This game left Gdynia’s team in a difficult position to stay among the first eight of Polish championship.

Before the match, many saw Arka Gdynia as a favorite. Especially after they won with Gornik Zabrze from the top of the league. What happened on the field, changed this perspective.

Pogon almost got the advantage at the 12th minute by Lasza Dvali. However, the referee cancelled the goal after spotting in VAR that Dvali rose his foot too high. Before he shot toward the goal, he almost kicked an Arka’s player that wanted to head the ball.

Pogon Szczecin was once again near the goal on the 26th minute after a great shot by Rapa from the right. Keeper Steinbors saved and Arka Gdynia’s defense was quick to put the ball well away from the box.

First half ended with another great opportunity for goal by Pogon Szczecin. This time it was after an excellent shot by Piotrowski. Once again, Arka Gdynia’s Latvian keeper flown to save what would be the first goal of the match.

Pogon Szczecin continued being the most dangerous team in field in the second half. In the 50th minute, Delev received a long pass from the right and was very near 1-0. The ball passed centimetres wide of Steinbors’ goal after Pogon’s player shot.

Home team kept pressing Arka’s defence. In the 60th minute, Pogon got the deserved goal. Fraczczak, who scored twice against Lechia last week, got the goal after an artistic pass from Delev.

Arka’s answer came only in added time. Warcholak served Kun. Although with three Pogon’s players nearby, he managed somehow to shot toward the goal. Keeper Zaluska kept the most needed three points to Pogon with an excellent save. Nevertheless the team from Szczecin is still last in championship.

At Bruk-Bet Stadion, where Nowy Sacz plays its games at home, Lechia Gdansk tried to recover from a compromising defeat at home precisely against Pogon. However, Green and Whites weren’t able to get more than a draw away by 2-2 to Sandecja Nowy Sacz.

The hosts got the advantage at the 15th minute. Patrik Mraz centered to the area where Kolev took advantage of Joao Nunes, fell in the box and scored the first goal of the game easily.

Lechia’s answer came five minutes later in a quick attack by the guests. Unable to cut the ball, Sandecja’s defense allowed Paixao brothers and Slavchev to put the ball in place for a good volley by Marco that ended up wide.

At the dying minutes of the first half, Lechia was near the goal again. Slavchev, served by Flavio Paixao, was quicker than a Sandecja defender. Hosts’ keeper managed to deflect the ball though and protected his team from going on a break with a draw.

Six minutes into the second half, Paixao brothers gave the draw for their team. It was a result of a quick play that started in the left side of Lechia’s attack. Flavio passed the ball to his brother and got the ball back again. With the help of Slavchev, he didn’t miss and made the 1-1.

At the 87th minute, Lechia almost sealed the victory. Peszko served substitute Joao Oliveira. The Portuguese showed nice technical skills to find the most suitable place to shot at goal to make the 2-1. He also benefited from a soft defensive action by the home team.

With less that two minutes to time, Lechia’s coach decided to remove Marco Paixao from the game. Right after that, Sandecja Nowy Sacz reached the 2-2 in added time. After a throw-in, Malkowski headed down the ball in the middle of Lechia’s defense and Mraz made the 2-2.

With this result, Lechia Gdansk goes on a winter brake at 11th place in Ekstraklasa. Six points away from the first part of the classification don’t allow a team to fight for the Polish title. What’s more, Lechia now has only nine games to avoid playing in the relegation zone.